Fishing for a Future

In the face of climate change and overfishing, artisanal fishers battle to feed a growing population.

Six days a week, hours before the first rays of sun brighten the pale cliffs above Cabo Blanco, Carlos Chapilliquén rows through the surf to his small wooden boat, climbs aboard and raises its sail. With a tug on the mainsheet and a flick of the tiller, he coaxes the wind into the cloth and the boat surges over the waves, into the heart of one of the most abundant marine ecosystems on Earth.

From the age of six, when his uncles taught him how to bait a hook and troll with the wind, Chapilliquén has worked the Pacific waters off his hometown in northern Peru, where the cold Humboldt Current sideswipes the warm equatorial current. The resulting upwelling of nutrient-rich water has long sustained a chain of rich marine life, from plankton and anchovies to mackerel, shark and tuna.

Chapilliquén, 44, has watched the horizon change dramatically over his lifetime as oil rigs multiplied offshore. Spills—such as a 11,900-barrel release near Lima in mid-January that devastated wildlife and left hundreds of fishermen out of work—are just one of “a mountain of challenges” that Chapilliquén says the area’s small-scale fishers face. Catches continue to decline as climate change advances. And large, industrial fishing boats from elsewhere—some fishing illegally—crisscross the nearshore waters, decimating stocks and jeopardizing local livelihoods.

“We play by the rules because we want to preserve the resource for future generations,” says Chapilliquén, a father of three who leads Cabo Blanco’s artisanal fishing guild. “But these giant ships come in and drop their nets to the bottom, killing everything in their path. We don’t have a chance.”

The fishers of northern Peru are not alone. As the United Nations names 2022 the International Year of Artisanal Fisheries and Aquaculture—in recognition of the contributions small-scale fishers, fish workers, and aquaculturists make to their communities and nations—many of the estimated 820 million people who depend on marine foods for their livelihoods are seeing catches and incomes plummet. A combination of destructive harvesting, pollution, climate change and coastal development is degrading already stressed ocean ecosystems and reducing fishery yields.

A looming food crisis in the tropics

For the past three decades, the human demand for wild fish has far outpaced what the world’s waters can reproduce. Today, more than one-third of fish stocks are below biologically sustainable levels. The tropics have been hit especially hard, as waters overheated by climate change cause prized species to migrate poleward to the cooler waters they prefer. The smaller, nutrient-rich fish that remain are increasingly scooped up by high-volume fishing operations to sell in faraway countries. Without drastic action, many tropical developing nations could see catches fall another 40 percent by the 2050s.

By then, the planet’s population is projected to have grown by more than 25 percent, making declining catches a food-security concern as well as an economic and environmental one. More than three billion people rely on seafood as a vital source of protein in their diets, and billions more depend on it for essential nutrients such as omega-3 fatty acids, calcium and iron.

“It spells a looming food crisis in the equatorial band where people are already at the threshold for inadequate nutrition and fisheries are most at risk from illegal fishing, weak governance and climate impacts,” says Christopher Golden, a Harvard professor who studies nutrition and environmental health.

Despite the dire outlook, many experts believe that foods captured or cultivated from the ocean or other waterways—sometimes called blue foods—could be the most promising way to sustainably feed growing populations while adapting to, and even slowing, climate change.

The Environmental Defense Fund (EDF) and partners around the world are working to elevate seafood’s role in addressing food insecurity, particularly in tropical developing nations, and to open new opportunities for sustainable and resilient marine ecosystems and the communities that depend on them. To be successful, the work requires governments, regulators and policy-makers to make a fundamental shift from treating fish not just as a commodity, but as essential food.

In Peru and many other developing countries, cash-starved governments either underestimate the value of their fisheries or sell the rights to harvest relatively “low value” fish to foreign entities, which profit by meeting the exploding global demand for fish oil and fish meal used to feed farmed fish and other animals.

“There’s nutritional gold in these countries’ waters, but they’re selling it as if it were fill dirt,” says Tom Grasso, who leads EDF’s work on climate-resilient food systems. The key to capturing that value, says Grasso, is for countries to align fisheries policies with nutrition and finance policies.

To establish the need for this shift, Golden and his collaborators created the most comprehensive nutritional database of seafood ever assembled, identifying more than 3,700 edible aquatic plants and animals ranging from seaweed to sharks, and analyzing the nutritional composition of each.

“We found some real surprises,” says Golden. For example, the team showcased several categories of small fish and shellfish with a far higher nutritional value than any type of cultivated terrestrial food including beef, and with a much lower carbon footprint. Farm-grown oysters, for example, have less than 0.5 percent of the greenhouse-gas cost of beef per kilogram of protein.

All around the Pacific Rim, from Peru, Mexico and Chile to Indonesia and the Philippines, EDF and partners are working to build awareness of fisheries as critical food systems and encourage supportive government policies. EDF also facilitates communications between traditional fishing communities across the world to share information and strategies for management and advocacy.

One successful approach has been to put the ability to measure fish catches into the hands of fishers themselves.

“When fishers back up their observations with data, they can influence the regulators to help set sustainable limits on catches,” says Chris Cusack who leads EDF’s oceans technology initiatives. In Chile and Indonesia, Cusack’s team distributed a smartphone app that allows fishers to report the size of their catch to local monitors, who then compile the data for managers to use when setting policy.

Other emerging technologies such as on-board video cameras and GPS trackers hold the promise of better information and decision-making.

To get a broader picture and support data-informed policymaking, EDF recently created SAPO (Sistema de Alerta, Predicción y Observación), the Humboldt Current’s first early warning system for climate impacts on fisheries. Onshore and on the high seas, vast amounts of data are collected each day from hundreds of instruments in Chile, Ecuador and Peru.

The project paves the way for more collaborative, climate-smart fisheries management across the three countries.

Many environmentalists believe that sustainably farmed fish could help meet a growing population’s demand for protein.

“With capture fisheries so close to their limits there’s broad recognition that most of the growth in seafood production will need to come from well-managed aquaculture,” says Jim Leape, co-director of the Stanford Center for Ocean Solutions. “The problem is that aquaculture relies too much on wild fish for feed.”

That’s a big problem, with about 25 percent of the world’s wild-caught fish now being converted to meal for farmed fish and other animals. Researchers are exploring alternative food sources, but farming species that are lower in the food chain may be the most effective way to reduce dependence on wild-caught fish meal.

Whether the subject is farmed or wild-caught seafood, there’s a palpable urgency to the conversation about the role of blue foods in sustainably feeding people and fighting climate impacts— a conversation that fishers like Carlos Chapilliquén say is essential and long overdue.

“God gave us this beautiful sea and filled it with life,” Chapilliquén says. “Now it’s up to us to defend her.” 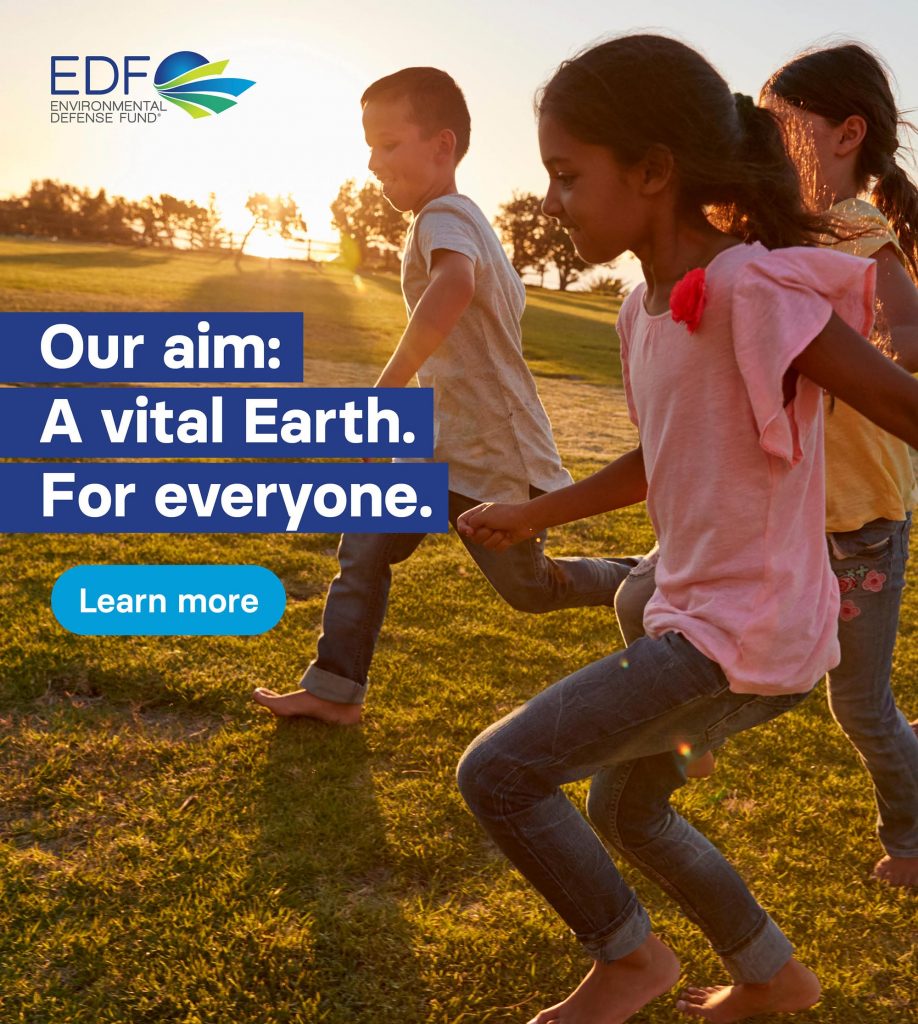 The Environmental Defense Fund began in 1967, as a scrappy group of scientists and a lawyer on Long Island, New York, fighting to save osprey from the toxic pesticide DDT. Using scientific evidence, our founders got DDT banned nationwide.